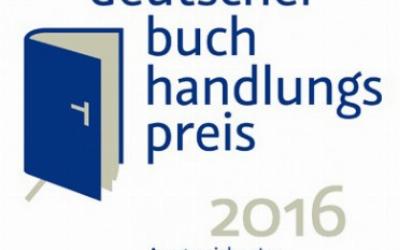 On October 5, 2016 the German Booksellers’ Award was presented at the Heidelberg Theater. The award was presented by Monica Grütters, State Minister for Culture and Media. Together with 4 other book stores, Lübeck’s own maKULaTUR was recognized as being “especially outstanding”.

Here is an excerpt from the laudation held by Thomas-Mann award holder Jenny Erpenbeck to 5 book stores at the German Booksellers’ Award ceremony:

“Selling books is (…) not only a hospitable profession per se, but also an occupation that thrives on shared interest in the world at large. Today we are recognizing 5 book stores that have especially dedicated themselves to this type of hospitality and this special form of interest in the world.

MaKULaTUR is a Lübeck-based book store that is dedicated to all things beautiful. The “Bücherbogen” at Berlin’s Savignyplatz served as an inspiration and first proving ground for the two owners – surely, it can be classified as a high-level starting point. In addition to art books and illustrated volumes, selected fiction and philosophical literature can be found at Lübeck’s maKULaTUR. Furthermore, despite the rather limited 55 m² of available space, the store offers regular musical and oratory events – filmed and published on the store’s own internet channel, which features the unique name “Wolkenkuckucksheim”. With this channel, maKULaTUR reaches a wide, young and open audience and serves as a beacon for less-beaten paths in a world that seems set on always finding the lowest common denominator to cater to the widest possible mainstream audience. The jury was unanimous in its decision to honor this Schleswig-Holstein beacon, which stands fairly lonesomely, as beacons have a tendency to do (…).”